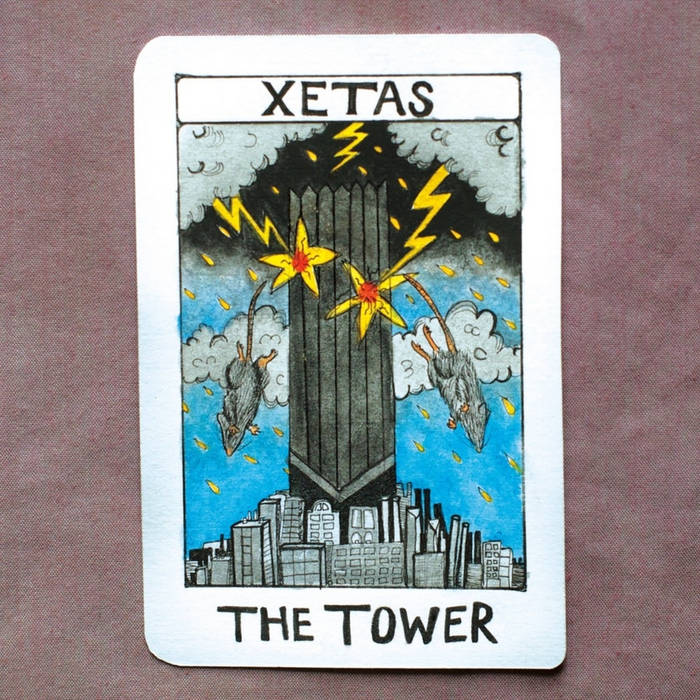 wagui Fast paced and driving without any sacrifice to the musical integrity or craftsmanship. Like a beautifully built diningroom sideboard lit on fire and launched from a cannon.

The most dangerous letter in the DIY Greek alphabet, XETAS are greeting 2017 with their sophomore album and spring tour, serious as a heart attack and more fun than the drugs they give you in the hospital after the medics bring you back to life.

Pumping through Austin's clogged Red River arteries since 2014, the Austin firebrands have temporarily broken their vows of Shaolin silence with ten tracks of unadulterated defibrillation --an electrifying monument to distorted melody and verbal hooks brought to a full boil.

This, after spending most of 2016 dedicating their lives to anonymity and heated discussions as to whether the city's most indispensable soundperson sleeps in his jacket.

Propelled by a new drummer -O.D.J.- who will one day drum a hole to China solely using jazz brushes, XETAS seemingly are on a collision course with the halls of power, despite the absence of any campaign coordination with the Russian ambassador.

Add in the blitzkrieg guitars, bass and vocals of D and K respectively and you've arrived at a collection of tools of the trade turned weaponized instruments the likes of which are sure to provoke many a sleepless night at NATO Headquarters.

Recorded over a 24-hour period in the fall of 2016 with engineer Ian Rundell (Carl Sagan's Skate Shoes, Spray Paint, Empty Markets), the 37-minute, 10-track album was recorded in less than than 7 minutes --a testimony to the band's energy and capacity for bending time and space after years of monastic devotion.

The melodies are dirty, distorted and delicious, dishing on the world in a jolting and at times unnerving manner, speaking truth to power, assuring a nation already grappling with insomnia under new federal management that it never sleeps again, in soundman Max's jacket, or otherwise.
- Paul Stinson

Bandcamp Daily  your guide to the world of Bandcamp

Serena Cherry debuts her black metal project, plus a Pick from the Crypt block from Svalbard